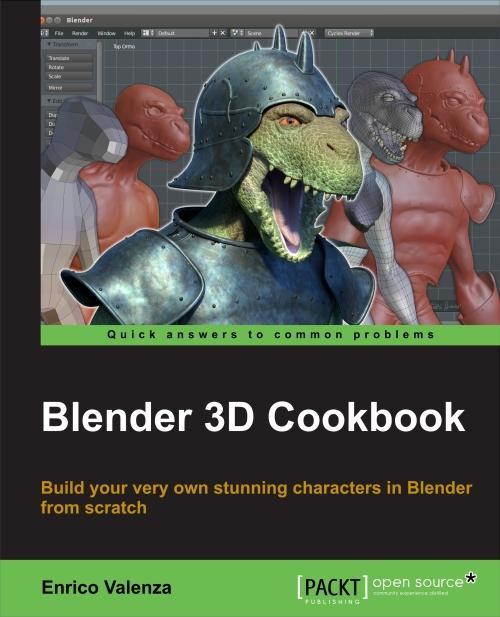 This book is mainly aimed at professionals who already have strong 3D CGI experience using commercial packages and have now decided to try Blender. If you are looking for something more complex and in-depth than the beginner’s tutorials on the Web, this book is for you. It's also aimed at intermediate Blender users who want to develop their skills with the software.

Blender is a powerful, open source toolset for 3D animation that is quickly growing in popularity within the animation industry. It has features comparable to expensive 3D software such as Maya, but is free of cost.

Thanks to the evolution of computer graphics, nowadays we see a lot of feature films filled with fictional creatures that were once almost impossible to realize with mere practical special effects. Slowly but relentlessly, the open source 3D suite Blender is now reaching the required stature to be able to realize believable 3D characters.

This book will take you on a journey to understand the workflow normally used to create characters, from the modelling to the rendering stages using exclusively the tools of the last official release of Blender.

It's assumed that you already know how to move inside the Blender interface, that you already have 3D modelling knowledge, and that you understand basic 3D modelling and rendering concepts such as edgeloops, n-gons, and samples; however, it's not impossible for a keen beginner to follow this book, combining it with the manual on the Blender wiki or by preceding it with a basic Blender UI tutorial on the Web. This book helps you create a character mesh and sculpt features using tools and techniques such as extrusion and polygon merging. You will also get a detailed, step-by-step overview of how to rig your character for movement, as well as how to perform skinning and compositing in order to make your animated characters more lifelike.

With the help of this book, you will be making production-quality 3D models and characters quickly and efficiently, ready to be added to your very own animated feature or game.

Enrico Valenza, also known on the Web as “EnV”, is an Italian freelance illustrator who mainly collaborates with publishers such as Mondadori Ragazzi and Giunti as a cover artist for sci-fi and fantasy books.

He graduated from Liceo Artistico Statale in Verona (Italy) and later became a student of illustrator and painter Giorgio Scarato.

When he started to work, computers weren't very common, and he spent the first 15 years of his career doing illustration with traditional media, usually on cardboard; particularly, he specialized in the use of the air-graph, a technique particularly esteemed for advertisement works.

When Jurassic Park came into theaters, he decided to buy a computer and try this “computer graphics” everyone was talking about. Totally self-taught, it was his encounter with the open source philosophy that actually opened a brand new world of possibilities; in particular Blender.

In 2005, he won the Suzanne Award for Best Animation, Original Idea and Story with the animation New Penguoen 2.38.

In 2006, he joined the Orange Team in Amsterdam to help in finalizing the shots of the first open source CG animated short movie produced by the Blender Foundation, Elephants Dream.

In 2007 – 2008, he became Lead Artist in the Peach Project Team for the production of Big Buck Bunny, the second Blender Foundation open source movie.

In 2010 – 2011, he became Art Director at CINECA (Bologna, Italy) for the Museo della Città di Bologna project, a stereoscopic CG animated documentary made in Blender and explaining the history of Bologna.

For Packt Publishing, in 2012, he wrote Blender 2.6 Cycles: Materials and Textures Cookbook, which is currently in the process of being updated for the current Blender 2.71 version.

Being a Blender Certified Trainer, he collaborates as a CG artist with Italian production studios that decide to switch their pipeline to open source.

Enrico uses Blender almost on a daily basis for his illustration jobs, and he has made several presentations and workshops about Blender and its use in production.