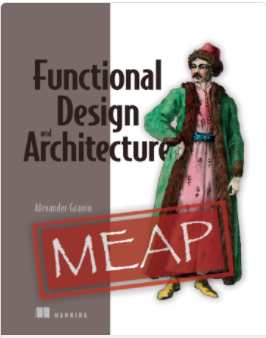 Functional Design and Architecture is a comprehensive guide to software engineering using functional programming. Inside, you’ll find cutting-edge functional design principles and practices for every stage of application development, from architecting your application through to running simple and maintainable tests. There’s no abstract theory—you’ll learn by building exciting sample applications, including an application for controlling a spaceship and a full-fledged backend framework.

You’ll explore functional design by looking at object-oriented principles you might already know, and learn how they can be reapplied to a functional environment. By the time you’re done, you’ll be ready to apply the brilliant innovations of the functional world to serious software projects.

This is the Second Edition of the book. Consider scrolling down to the info about the First Edition.

The book is very practical. Application architectures, best practices, design patterns and approaches, — all the information you need to achieve a simple, maintainable, testable code with low complexity and low risks. By reading this book, you’ll learn many useful techniques: from the requirement analysis to the implementation of particular subsystems such as SQL and NoSQL databases, multithreading, logging. You’ll learn about design principles, application layers, functional interfaces, Inversion of Control and Dependency Injection in Haskell.

It will be useful for software engineers who want to improve their software design skills with a strong relation to many advanced Haskell concepts.

The book requires a certain level of Haskell knowledge, up to intermediate.

The book covers a big gap in the Haskell ecosystem: the lack of resources about high-level application design. It’s also important that the ideas from the book were used in real production with great success. The book offers my own methodology — Functional Declarative Design, with Hierarchical Free Monads as a core technology. Using this methodology, I created several real-world frameworks, and they are driving a successful business in several companies.

There are several real-world projects based on the ideas from the book:

The book is project-based. Actually, 2-projects-based.

My articles about Hierarchical Free Monads: