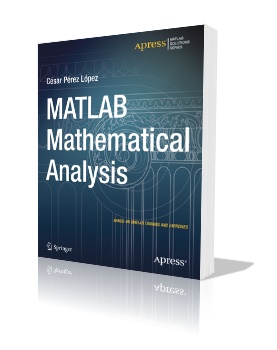 MATLAB Mathematical Analysis is a reference book that presents the techniques of mathematical analysis through examples and exercises resolved with MATLAB software. The purpose is to give you examples of the mathematical analysis functions offered by MATLAB so that you can use them in your daily work regardless of the application. The book supposes proper training in the mathematics and so presents the basic knowledge required to be able to use MATLAB for calculational or symbolic solutions to your problems for a vast amount of MATLAB functions.

The book begins by introducing the reader to the use of numbers, operators, variables and functions in the MATLAB environment. Then it delves into working with complex variables. A large section is devoted to working with and developing graphical representations of curves, surfaces and volumes. MATLAB functions allow working with two-dimensional and three-dimensional graphics, statistical graphs, curves and surfaces in explicit, implicit, parametric and polar coordinates. Additional work implements twisted curves, surfaces, meshes, contours, volumes and graphical interpolation.

The following part covers limits, functions, continuity and numerical and power series. Then differentiation is addressed in one and several variables including differential theorems for vector fields. Thereafter the topic of integration is handled including improper integrals, definite and indefinite integration, integration in multiple variables and multiple integrals and their applications.

In order to understand the scope of this book it is probably best to list its content:

Who this book is for

This handy desktop reference is for people in a wide range of jobs that utilize various mathematical analysis tools, or for academic pursuits, including researchers and students. It teaches how to use the most widely used analysis techniques in MATLAB to solve and or graph problems without being burdened with theory.

Chapter 5: Limits of Successions and Functions, Continuity, and One and Several Variables Systems

Chapter 7: Derivatives in One and Several Variables

Chapter 8: Integration of One and Several Variables and Applications of Developments in Series